Shuck Oysters to Start off your New Year’s Resolution!

Posted on January 2, 2018 by Shana Schnitzer

We love the positive vibes we get once the new year begins. Everyone is so excited to start the new year off on the right foot and create goals to make it the best yet. So often, though, people give up on their resolution come February. Why? We believe that the starter goals are too broad and ambitious for most people starting out on a journey. Why not start with someone smaller and work your way into bigger goals in order to stay on track and keep yourself from getting overwhelmed? Here’s a simple goal that can help you kick off an array of New Year’s resolutions: Learn how to shuck oysters.

For starters, many people choose fitness and health as a goal in the new year. Oysters are super healthy for you, low in calories, and can make you feel like you’re splurging on your diet even though you’re not. Maybe your goal is to spice up your love life…or get a love life, for that matter. Oysters make a wonderful meal, plus they’re said to be an aphrodisiac. Want to learn how to cook in 2018? Oysters are a great, fresh dish to learn! With all of this being said, let’s get to the oyster-shucking details!

Hold the oyster with the cupped side in your palm or set it cupped side down on a flat surface. The flatter of the two sides should be facing up. The reason this is important is that the cupped side will hold the oyster and any juice inside the shell. Otherwise, the oyster and juice might slip out during the shucking process. While holding the oyster, find the hinge, or the area where the top and bottom shell meet. Hold the shell steady and insert your tool of choice right next to or on the hinge. Push the knife in far enough so you can get the leverage you need to pop the hinge. From there, push on the knife to pop the hinge open.

Once the hinge has been popped, slide the knife between the two shells, brushing th 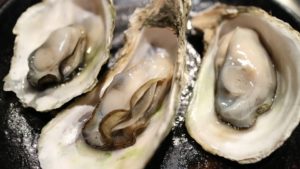 e knife against the bottom of the shell on top. This should be the easy part, but you might need to put a little muscle into slicing through where the oyster meets the shell. Keep in mind that you don’t want to mangle the oyster while performing this part of the shucking.

Separate the two shells now that the oyster is free. Scrape off any meat that is stuck to the top shell and the main chunk of meat from the bottom shell to make slurping easier. Be sure to be as careful with this process as you can so you don’t lose too much of the juice inside the shell. If you’re worried about losing juices, try shucking over a bowl and pouring the lost juice over the oyster once you’re done.

You should serve your oysters ASAP and do so by placing them on a tray with ice to keep them as fresh and cool as possible. Add whatever additions you would like to the dish. Tabasco and lemon juice are both popular choices, but there are many topping variations to choose from.

This wasn’t too hard, now was it? Now that you’ve taken the first step in accomplishing an even bigger new year goal you’re ready to take the next step- whatever that may be. If you’re just not in the mood shuck oysters yourself, Tommy’s is always here for you! Plus, we offer $8/DZ oysters during happy hour and all day every Tuesday and Friday. What a deal!