Oyster Have THIS in Common With us Humans

Okay, y’all. Brace yourself for what you’re about to read. Researchers have discovered that oysters are more similar to us humans that what was once thought. We know what you’re thinking- how in the world could a human be compared to an oyster? We’re totally different, right? Wrong! Interestingly enough, we share a particular sense that we didn’t believe was possible.

What Do We Have in Common?

So what’s behind this air of mystery that we’re holding from you? Surprisingly, oysters can hear. Yeah. You read that right. Despite not having ears like humans, they are able to pick up on sounds. Your next question is going to be, “How do we now know that oysters are able to hear?” Well, friends, it’s all thanks to a curious diver who couldn’t get over how noisy nearby barges were and wondered if his shelled friends could hear the loud noises as well. This diver brought his curiosity to a friend of his who happens to be none other than French researcher, Jean-Charles Massabuau.

What do the Studies Find?

Massabuau gathered a team together to test this question brought forth by his diver friend. The team latched small electromagnetic sensors to each oyster shell that would allo 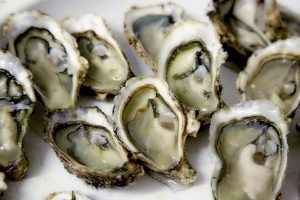 w them to send pitch variations. From there, the researchers would be able to study how the oysters reacted to pitches. As you can guess (we kind of spoiled the surprise for you at the beginning, didn’t we?) they noted that oysters were able to pick up on vibrations. Just as we go to a quiet place or use earplugs to get a little peace and quiet, oysters shut their shells when the vibrations intensify. It seems as though we’re not the only creature who’s looking for a little peace and quiet, huh?

Unfortunately for our oyster friends living near the path of barges, quietness will be hard to come by considering the increase in barge traffic that is happening more and more. If it makes anyone feel any better about the noise situation, though, oysters can seemingly only hear low frequencies as opposed to high frequencies. Not too bad for a creature that doesn’t have ears!

How Can You Help?

This is the best question you’ve asked thus far! As a restaurant who is very invested in ocean conservation, we pride ourselves on doing all we can to help our ocean life thrive. We work with the Galveston Bay Foundation to rebuild oyster reefs (preferably as far away from the path of barges as possible) to encourage wildlife to stay in the bay. Take a peek at Galveston Bay’s website for volunteer and donation options, or simply visit Tommy’s to enjoy our oysters! Every oyster that you eat has its shell recycled to build up reefs that were torn apart by various hurricanes. Be part of the solution- join the ocean conservation movement today!